Vir: The Robot Boy: A Robot with human emotions. 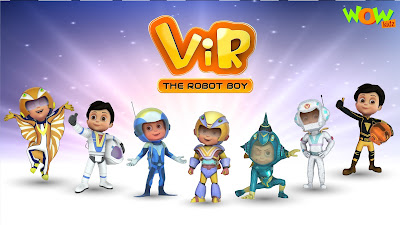 Vir: The Robot Boy is a 3D animated series that aired on Hungama TV. The story-line revolves around Protagonist Vir who is a robot but actually looks like a boy and has human feelings, and his friends Imli his classmate, Chulbul-the donkey, Gintu- the Jinn.

Vir was invented by well-known scientist Dr.Prem Sahay, he invented Vir so that he could help people however the Defense Department was planning to use him for military purposes. Dr. Prem Sahay escaped him to India in a fictional city named Fursatganj, but Mad Max the villain tries to trap Vir and make duplicates of him to rule over the world with their help.

Vir is a humanoid robot who works on chargeable batteries, he is intelligent, has emotions like humans, he loves to play with his friends like a normal kid and fight with all the evil people in the society. He has 10 different suits to fight the evil and help people in the society.Every chapter has unconnected story where Vir and his friends fight their way out from the trouble Mad Max creates for them.

Full on action based series with adventures and thrill, Vir: The Robot Boy is kids favorite show in India. And is rated as the best kids show launched in 2013. Take a roller-coaster ride with Vir: The Robot Boy available only on Wow Kidz.
Posted by Wow Kidz at 22:04

Email ThisBlogThis!Share to TwitterShare to FacebookShare to Pinterest
Labels: VIR: THE ROBOT BOY